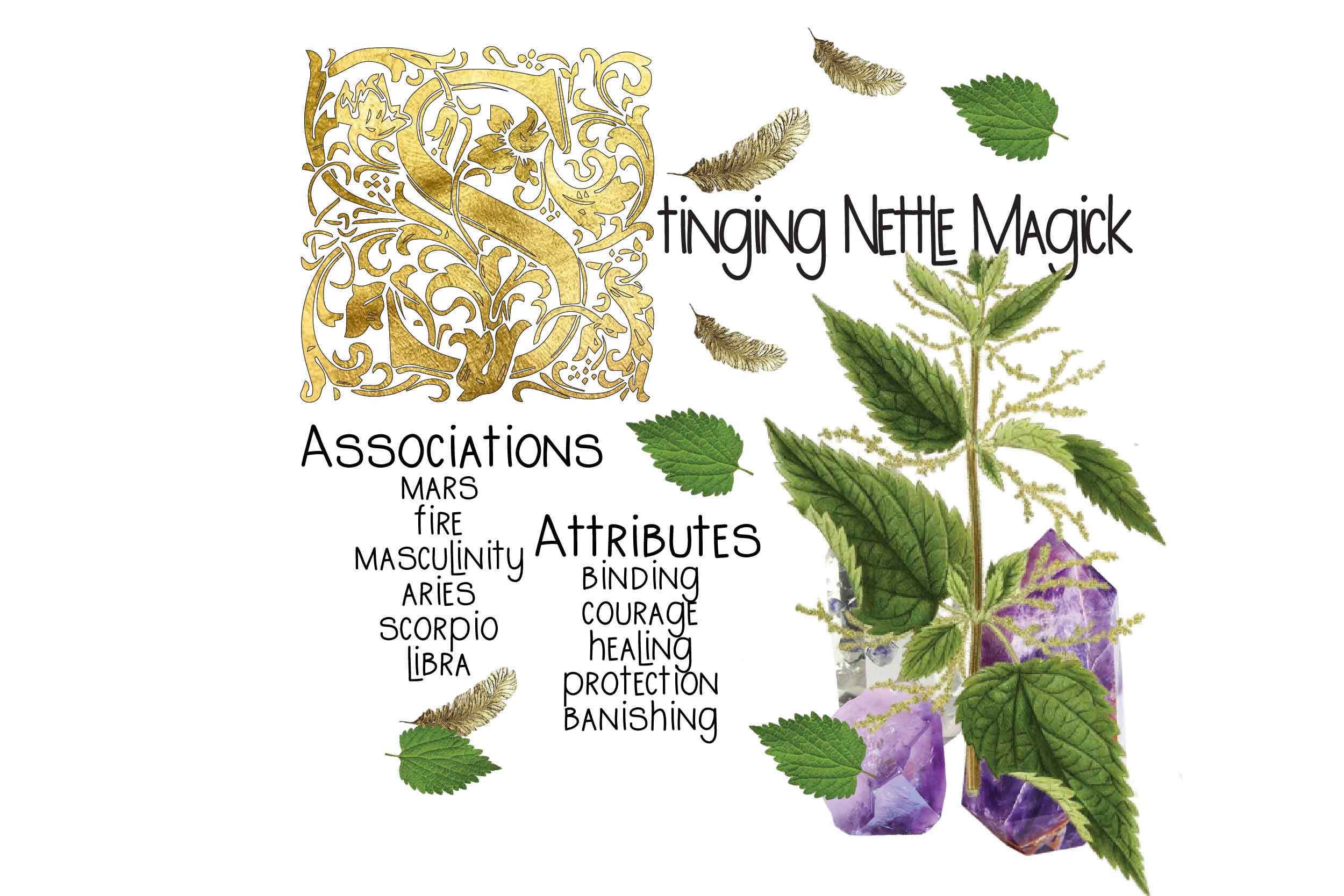 Nettles have been used for healing and textiles for thousands of years. The fibres were prized for their strength and durability and they were used medicinally to treat everything from poor circulation to healing wounds. The magickal properties of nettles include protection, healing, strength and love among others.

If you enjoy reading about the magickal properties of different herbs and plants, check out this gorgeous plant magick grimoire we’ve created! It contains 29 beautifully illustrated pages for all our favourite plants. The best bit? This version comes as a digital download, so you don’t have to wait through pesky shipping times or delays. What’s not to love? Check it out below or keep scrolling to read all about the magick of fennel!

Nettle, the most common form of which is stinging nettle or Urtica dioica, is a flowering plant in the Urticaceae family. It’s native to Europe, Asia and western North Africa but is now found all over the world. There are 6 subspecies, 5 of which have hollow hairs under the stems and leaves which act like needles to inject histamines and other chemicals under the skin. This is what causes the stinging sensation if you touch them.

In Ancient Egypt, nettle was used to treat arthritic pain. People would flog themselves with fresh nettles, a process which is called urtification, in order to treat rheumatism, lethargy and even cholera. This practice has been around for thousands of years. It’s thought that the histamine in nettles causes the body to release an anti-histamine response which causes it to reduce inflammation and swelling, both things that alleviate pain related to rheumatism and arthritis.

There are reports that Roman soldiers would carry nettles with them in order to treat leg pain due to the long journeys in the cold. They would rub their legs in nettles to increase circulation, which would both ease pain and warm the soldiers. There is some documentation that urtification also occurred in Ecuador Indians and Native American and Canadian tribes. They may have used it as a way to make themselves more alert during hunts.

The famous Greek physician Hippocrates (460-370BC) used nettles in over 60 different remedies. Galen (129-210AD) prescribed nettles for many ailments, from dog bites to swellings to spleen related illnesses and more. Through the Middle Ages (5th to 15th centuries) nettles were used to treat shingles, sinus ailments and constipation.

Nettles continued to be used for medicinal purposed until recent times. The famous herbalist Nicholas Culpeper used nettles and honey for mouth and throat infections and also as a treatment of skin infections and poisons. They were used by herbalist O. Phelps Brown in the 19th century to treat infant eczema, kidney stones and fevers among many other things. Nettles have also been used by women for centuries to slow bleeding during childbirth and to ease labour pains. Because of their ability to stop bleeding, they were also used in dried or powdered form to coat wounds to stop bleeding and to prevent infection.

Nettles were used throughout history as a treatment and prevention of scurvy and were, they still are in some places, eaten as a green vegetable.

Today, nettles are prized for their nutritional value and for their ability to stimulate blood flow and circulation. Nettles are full of iron, vitamin c and magnesium and are used for everything from relieving aches and pains to making pizzas to fertilizing gardens. What a powerhouse they are!

Nettle is most commonly taken in tea or capsule form. It’s considered safe when taken orally and also when applied to the skin although care should be taken here as it can cause skin irritations. Obviously touching a nettle plant will result in skin irritating if handled incorrectly so be careful if you plan on harvesting your own nettles.

Pregnant woman shouldn’t take nettle as it can cause uterine contractions which may lead to miscarriage. It’s also best to avoid nettles if you are breastfeeding. Nettles also interact badly with a number of medications. If you take medication for a serious health condition, always make sure to discuss the use of any herbal treatments with your doctor.

Nettle is a strong magickal plant which is often used for protection. If you feel like you are being hexed, carry a sachet with dried nettle in it to remove and repel the hex. Harness the magickal properties of nettle by sprinkling dried nettle around your home. This will keep all malevolent influence and energies out of your home and send them back to where they came from while also filling your home with gentle loving vibrations.

Throw nettle into a fire in order to avert any imminent danger you might feel is threatening you. This will also keep any malevolent spirits away. Make an amulet with nettle and yarrow to keep fear at bay, this is great if you have a presentation or public speaking something up. This amulet will also keep negativity away from you.

Keeping freshly cut nettles in the home will keep sickness out and will bring healing energies to anyone who may be sick already. Obviously don’t forgo a trip to the doctor, magick and herbal treatments should always be used in conjunction with a medical professionals advice and absolutely shouldn’t replace it.

Nettle will help you release any lingering doubts and stresses while giving you nurturing energy if you are beginning a new project. It helps to give you courage and to show you your own worth. Drink nettle tea to use these magickal properties of nettles. This will also help you to open up limited ways of thinking if you feel stuck in a rut.

Nettle can be used to induce lust. If you need a strongly purifying bath, add nettle as it is one of the strongest magickal purifiers out there. Wrap a nettle leaf in green or yellow or purple cloth and place it in your wallet to attract abundance.

Other Magickal Properties of Nettle

So, my lovelies, I hope this guide has given you everything you were looking for about the magickal properties of nettle! May your days be free from negativity, your home filled will love and abundance and your nights healing and gentle.