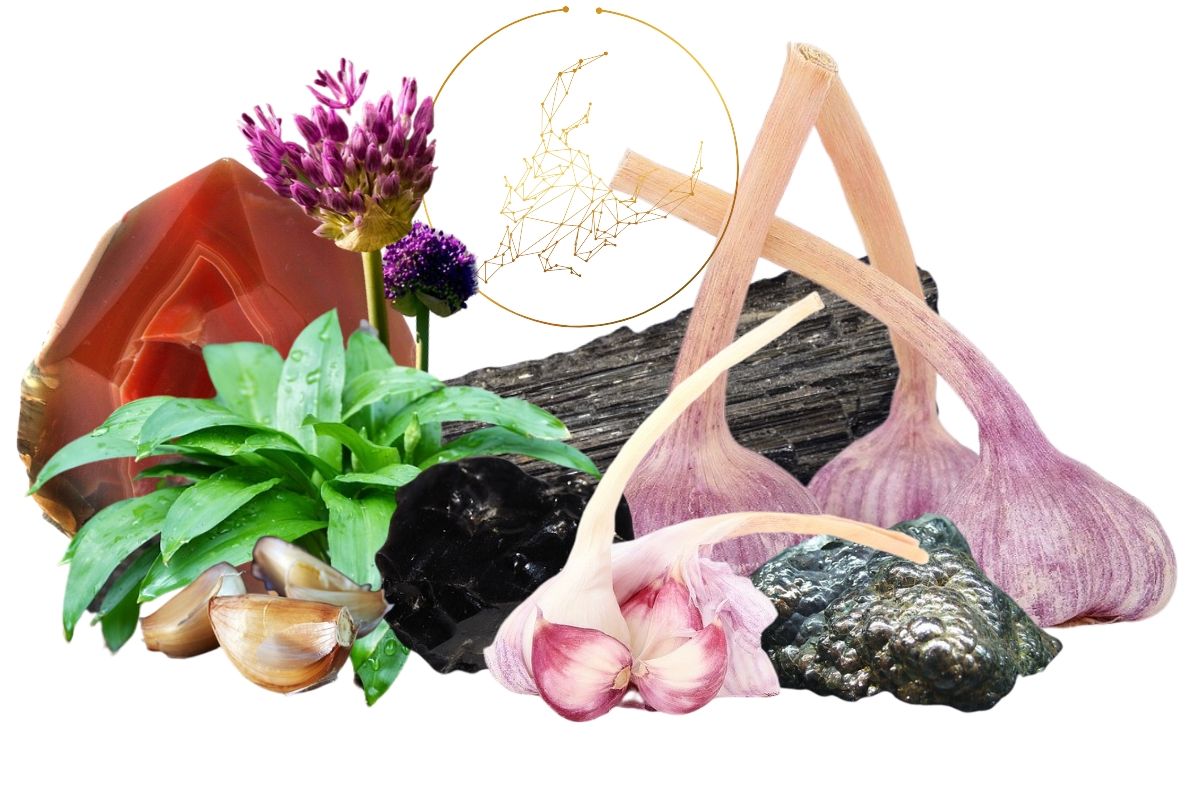 Hi, my loves and welcome to WiccaNow. Recently I’ve been sharing all sorts of magickal plant and herb guides, like this guide to the magickal properties of pine, another about dandelion, one on the wonderful loving energies of vanilla and another all about lemongrass. I’ve also shared my botanical witchipedia for all those of you wanting an overview of lots of plants and herbs. Today I want to continue down this path by sharing my guide to the magickal properties of garlic.

Garlic is an ancient plant which has been used for thousands of years to provide protection, strength and healing. It’s one of the oldest cultivated crops in the world and has the ability to grow in most climates. The magickal properties of garlic include protection, healing, banishment and expulsion of negative energies. Medicinally it can prevent colds and reduce the risk of lung cancer among many other benefits.

Garlic, also known as Allium sativum, is a species in the Allium genus. It’s a very close relative of onions, shallots, leek, chives and Chinese onion. Garlic is believed to have originated in Central Asia and the regions around Northeastern Iran.

Humans have been using garlic medicinally and as food seasoning for thousands of years. There are various records which show that garlic was being grown in Mesopotamia at least 4000 years ago. It’s been found in the excavated tomb of Tutankhamun (1325BC). The fact that he was buried with garlic show it’s significance, as nothing except items of the greatest value would have been put into the tomb. There are traces of actual garlic in the tomb as well as clay containers shaped like garlic. Researchers are unsure if the clay bulbs were intended as a currency or whether they were idols to appease the gods in the afterlife.

Garlic started its journey in Central Asia during the Neolithic Period from where it spread to the Middle East and then on to Northern Africa. By 3000BC it had reached Europe. Most researchers believe that the species of garlic we have now may have evolved from a wild species called “Allium longicuspis”. It evolved for thousands of years before becoming what we use today.

Allium longicuspis was domesticated by the Ancient Indians over 5000 years ago. They believed that it was an excellent aphrodisiac and also used it for other medicinal purposes. From India, trading parties from the Middle East introduced it to Babylon and Assyria.

The Ancient Egyptians wrote about garlic relatively often. Garlic was used by commoners, slaves and nobles as a seasoning, a medicinal treatment and as a religious ingredient as they believed that it could prolong a persons lifespan. They also believed that it was effective in healing wounds and preventing gangrene from setting in. The noble Egyptians allegedly fed their slaves garlic because they thought it would make them stronger while they were building the pyramids.

When garlic was brought to Greece and Rome by the crusaders, it’s popularity rose even more. They believed that garlic could do everything from repelling scorpions to curing asthma to preventing the spread of smallpox. The nobility, however, thought that eating garlic was only for the lower classes and refused to consume it.

The belief that garlic could help illness and prevent further infection in wounds is based in some fact as garlic does have strong antibacterial properties. Scientists proved this in 1858 and because of these findings garlic was used to as a dysentery cure and an antiseptic during both the first and the second world wars.

The English didn’t like the smell of garlic and it was deemed “unladylike”. Americans also adopted this attitude and up until the 1940’s, garlic was considered an “ethnic” food and was rudely called “Italian perfume”. Since the 90’s American consumption of garlic has tripled as people learned to love this pungent herb.

Garlic has been used for centuries for various medicinal purposes. It’s most potent when eaten raw, but cooked garlic also has medicinal benefits. Please be aware that garlic may cause nausea and other side effects if consumed in excess. Asthma sufferers in particular should take care with garlic as it can cause side effects.

The Magickal Properties of Garlic

Garlic is often hung over doors to repel negative or malevolent energies. This stems from old folklore in which people believed that hanging garlic over the windows and doors would prevent malevolent spirits and vampires from being able to enter. Garlic and the Allium family have the unique magickal properties of being extremely strong repellents while also being strong attractants of love and lust.

If you want to try using garlic in a spell, I’ve posted a recipe for a potent banishing oil which contains garlic or you could try out this love spell to attract a new love which we’ve used leek for, but garlic can be used just as effectively.

So my loves, I hope this gives you all the information you were searching for about the magickal properties of garlic! Let your energy be positive, you love passionate and your home protected.

Amythest is a true white witch spreading love and light wherever she goes. When she's not in the kitchen blending oils and baking delicious treats for her friends you can find her walking in nature, communicating with the great divine or, perched serenely atop her meditation pillow.