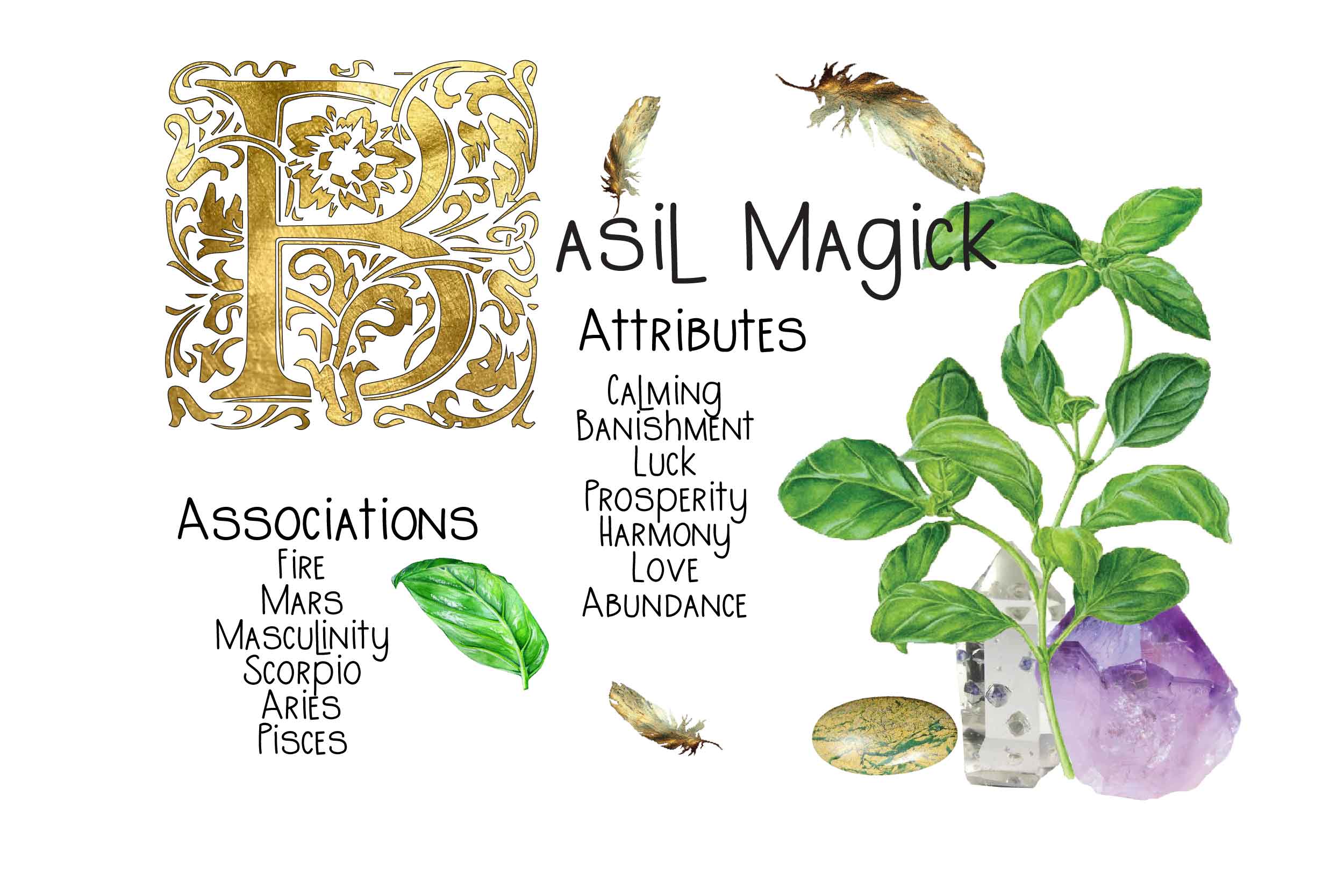 Basil is an ancient healing herb used for centuries in Ayuverdic medicine to treat everything from snakebites to inflammation. Originally from Asia, basil is now found in various cultivars all over the world. The magickal properties of Basil include luck, prosperity, abundance, protection and harmony among many others.

Basil is thought to have originated in India and it’s been cultivated for over 5,000 years during which time it’s spread to all corners of the earth. Its exact origins are a little unclear as there is some evidence, in the form of ancient records from 807AD, which suggest that it might have originated in the Hunan region of China rather than in India.

From India, basil was carried to the Middle East where the Ancient Egyptians used it as part of their mummification process (maybe due to its strong anti-fungal effects). Traces of it have been found in plenty of ancient Egyptian mummies. Due to its use in burials, it became known as a mourning herb.

By 350BC it had made it’s way to Greece and Italy via spice trading routes from where it spread all over Europe. It quickly became a common culinary, medicinal and religious herb.

Interestingly, during medieval times, people assumed that basil was poisonous. This was due to the fact that basil and rue don’t like to grow next to each other, and as rue was considered to be an antidote to many poisons, basil was thought to be toxic.

In the 1500s, some “physicians” thought that scorpions would grow in your brain if you smelled basil. This is due to one English gentleman in Italy who wrote that leaving a basil leaf in a damp place ensured that a scorpion would appear there 2 days later. There are even anecdotal references by other physicians to patients dying from scorpion infestations due to smelling basil too often. Obviously this wasn’t something that actually happened.

Basils journey through Europe brought it to England by the 1600s, and from there it was brought to the Americas. Today there are over 150 different cultivars of basil and it’s found all over the world.

As mentioned earlier, tulsi basil has been a staple herb in Ayurvedic medicine for thousands of years. It was used to treat snakebites, inflammation of the nasal passages and for common colds. There are many different varieties of basil and not all of them are equally medicinally effective. If you plan on using basil for health reasons, always make sure that you are using a variety that is actually medicinally beneficial.

Basil is a common addition to money and success spells (I’ve already mentioned this in my article about the best herbs for drawing money to you). Keep a leaf in your wallet to draw success to you or make a 3-day infusion of basil in water, then add it to a mop bucket and mop your entire house with basil water to call success to your household. This would also work in your place of work.

Plant basil outside your home to repel negative energies and malevolent intent. If you keep basil inside, you are calling prosperity to you, just make sure to keep the basil plant nice and healthy for it to work at full effect.

Basil makes a great addition to a love charm as it invites success in love. Giving a basil plant to a newly married couple is thought to ensure that their marriage status sweet and prosperous. If you want to call love to yourself, give the person who you are interested in a basil plant or cook them a meal with basil in it.

Other Magickal Properties of Basil

So, my lovelies, I hope this guide gives you all the info you were looking for about the magickal properties of basil! May your days be filled with success, your nights filled with love and your energies stay strong and protected.