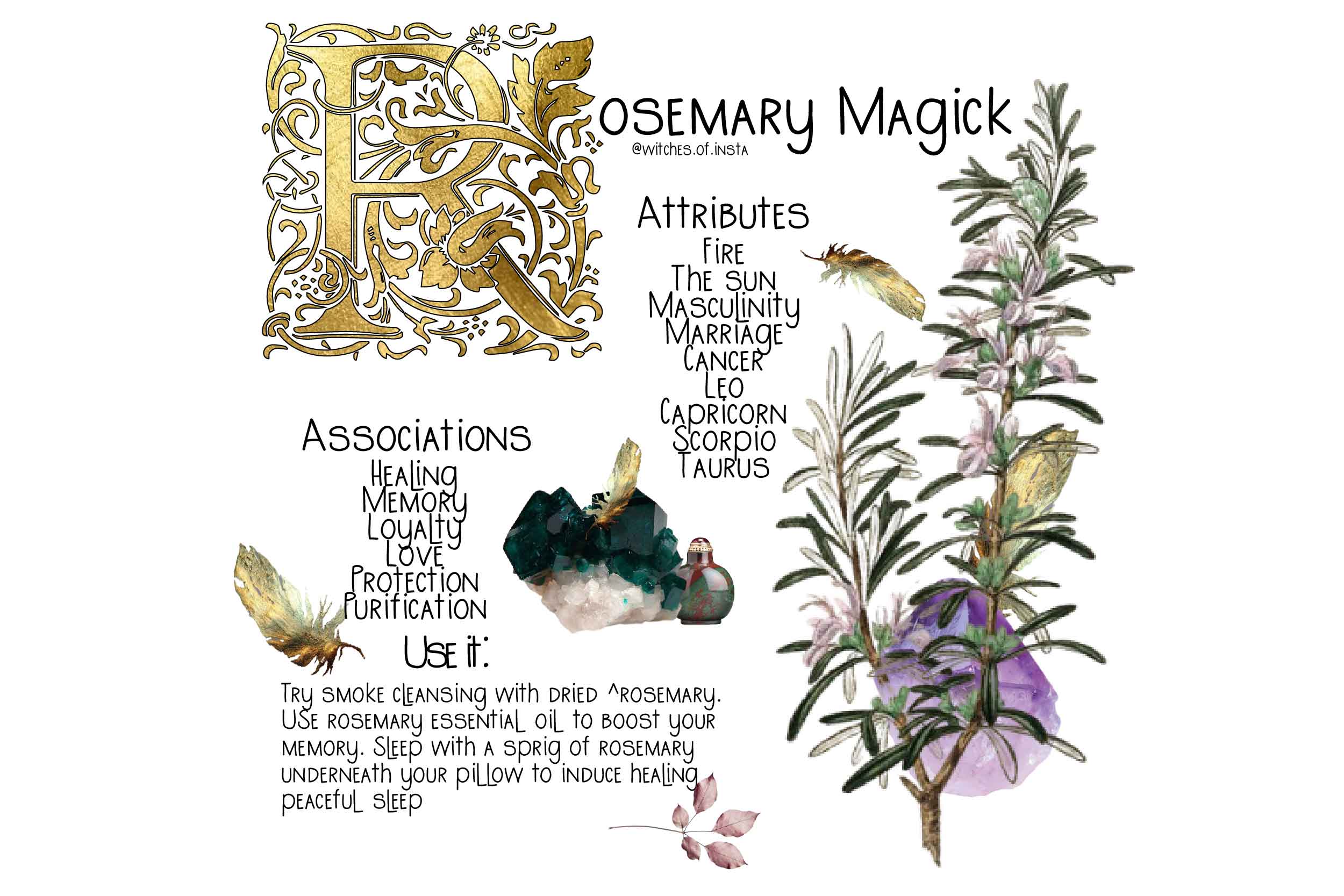 Hi, my magical warriors and welcome to WiccaNow. Today I want to continue down our herb-filled path and talk about the magical properties of rosemary. I’ve talked about herbs for luck, herbs for protection, herbs for love spells and money herbs as well as the many uses of lavender and cinnamon along with my all-encompassing Botanical Witchipedia but today I wanted to delve deeper into rosemary. Rosemary is such a multifunctional, strong herb and I always like to keep a good stash of it at home in case I need it.

Before you start reading all about rosemary, take a second to check out this awesome grimoire we’ve created for it. It’s filled with all our own personal tips and tricks along with our favourite rituals and spells. This handy digital version means you can always reference it on the go!

The History of Rosemary

Rosemary has a long history. It is native to the Mediterranean region and written evidence of it first appeared on stone tablets in Mesopotamia from around 5000BC.

The Ancient Egyptians used rosemary in their burial rituals, maybe due to its antifungal and antibacterial properties which would have helped in the mummifying process. Sprigs of it have been found in tombs from as early as 3000BC. There is no more written evidence of rosemary until it appeared in Pedanius Dioscorides’ “De Materia Medica” which was published between 50-70AD.

At some point in the early 200’s, during the Han Dynasty, rosemary made its way to China. We’re all aware of Eastern Medicines love of herbs so rosemary probably made a wonderful addition to their healing herb portfolio.

There are no records stating exactly when rosemary first arrived in England. We assume that the Romans introduced it when they invaded England during the 1st century. However, there are no direct records of this and the first mention of it is in the 8th century. It’s thought that Charles the Great is responsible for spreading rosemary around England. He was a herb-friend and ordered rosemary, along with many other herbs, to be grown in the kitchen gardens of nunneries and monasteries.

In 1338 Jeanne of Valois sent Queen Phillippa a letter describing the uses of many different types of herbs along with a cutting of each herb. Included in this letter was rosemary. Jeanne of Valois intended that the herbs be planted in the palace gardens and since then many of these herbs have been staples in English cottage gardens. The original letter Jeanne sent still exists and is in the British Museum.

Rosemary was brought to the Americas by European settlers during the 17th century from where it spread to the rest of the world.

What is Rosemary Used For?

Rosemary has many, many uses. During the Middle Ages (5th to the 15th centuries) it was used to ward off negative energies and evil. It was placed under pillows to ward off nightmares and was burned in houses to keep away the plague. The idea that rosemary provided protection and purification still continues today and it is often used to purify sacred places.

It used to be very common for a couple getting married to incorporate rosemary into their wedding. The bride would wear a headdress which would feature rosemary and the groom and guests would also wear a sprig attached to their clothing. It’s thought that this tradition was started because rosemary could improve your memory and recall. Wearing a remembrance herb meant that it was more likely that the bride and groom would remember their sacred vows to each other. Guests would wear rosemary so that they could better remember the event.

Rosemary would be planted at the door of the newlyweds home, the idea being that if the plant took root and flourished, the marriage would too. The traditional use of it at weddings meant that it soon became known as a love herb and was included in many love spells and charms.

Fun Fact: Rosemary stopped being planted in front of houses by the late 15th century because there was an old saying “where rosemary flourished, the woman ruled” which meant that the men of the household felt emasculated and would rip the rosemary bushes out. Oh, the joys of a fragile ego…

The Ancient Greeks also believed that rosemary helped with memory and scholars were known to wear rosemary crowns to help improve their memory while they were taking exams. Rosemary is still linked to remembrance today and is often worn at memorial events. Wearing a sprig on your coat is common during Anzac Day in Australia and New Zealand although this is now being taken over by the poppy.

Medicinally, rosemary had a myriad of uses. It can help with digestion problems, heartburn, gas and loss of appetite. It can help to treat gout, coughs, headaches, blood pressure problems, stress and depression. Rubbing rosemary oil onto the skin will increase circulation which can help to relieve muscle aches and is especially good for people with arthritis. Rosemary oil has also been suggested as a treatment for hair loss. Because it stimulates circulation, particularly to the head and brain (hence why it’s good for concentration), it can help to prevent the premature loss of hair.

Can You Eat Rosemary?

Yes absolutely! Rosemary is a very safe herb to eat in normal quantities. It has been classified as safe by the FDA. It’s a delicious addition to many recipes. My favourite pairing is roasted potatoes with rosemary. It can also be used to add an interesting note to cocktails.

What are the Side Effects of Rosemary?

There are not very many negative side effects of rosemary. Experiments done on rats have found a very low toxicity rate even in high concentrations when consumed over long periods of time. However, it is worth knowing that there can be some side effects.

In another study, rats were found to experience a slightly higher rate of pregnancy failure when given rosemary leaf extract before implantation had occurred. Once implantation had taken place however, rosemary extract did not seem to affect the pregnancy. I would like to note that I am simply sharing research which has already taken place and I don’t condone animal testing.

It’s interesting to note that there are old remedies which include rosemary that women would use if they wanted to abort a pregnancy. Rosemary can cause uterine contractions which can increase bleeding which can in turn cause miscarriage.

Rosemary can also increase blood sugar levels so isn’t advised if you have diabetes.

Can Rosemary Grow in Shade?

Short answer: Yes, rosemary can grow in the shade but prefers sun. It’s is a member of the mint family and can tolerate relatively harsh conditions. It’s drought hardy and can survive for long periods of time without water. Rosemary does prefer full sun and will thrive when planted in a sunny but sheltered environment. It doesn’t appreciate the cold and needs to be taken inside if the temperature goes below -5 to -10 degrees celsius. Many people who live in colder climates like to grow it in pots so that when it starts to go below zero, they can take the plants inside to protect them.

If you live in a warm climate, however, you can plant rosemary in partial shade and it should still grow nicely. Just make sure to provide really good drainage because rosemary hates having wet feet.

Does Rosemary Help You Sleep?

I’m on the fence about whether I think rosemary will help you sleep. On the one hand, it is a mood lifter and regulator which can relieve stress and depression, both of which can cause sleeplessness. Rosemary plants can filter the air and improved air quality has been proven to lead to better sleep.

On the other hand, it can cause vivid dreams which in my opinion make for a very unrestful night’s sleep. Other people disagree with me on this point, because they think that vivid dreaming can help process troubling information which is causing sleeplessness. Dreaming can definitely help you clarify situations that you are unsure about, but if you have on-going sleep issues, I’m not sure that rosemary is the best herb for you. I would suggest lavender instead as it has proven calming properties.

Why is Rosemary called Rosemary?

Rosemary is native to the Mediterranean and grows best when it is by the sea. Its name comes from the Latin “Ros Marinus”, meaning “Dew of the Sea” because from a distance the small blue flowers can look like dewdrops on the plant.

There is an alternative narrative as to where Rosemary got its name. While the Virgin Mary was fleeing from King Herod with the infant Jesus, she stopped for shelter under a rosemary bush. At the time the plant had small white flowers. Mary laid her blue cloak over the bush so that the cloak could dry. After this, the white flowers turned blue and the bush took on the name “Rose of Mary”. Personally, I think the Latin name makes more sense.

The Remarkable Magical Properties of Rosemary

Rosemary is a magical all-rounder and can be used as a substitute for most other herbs in your magical practices. For example, if you can’t find frankincense and need it for a ritual, rosemary will work just as well and is easier to come by.

If you grow rosemary in your garden, you are more likely to attract elves. The added benefit of having it in your garden is that it can help to repel thieves. Plant it under your windows and close to your doors for this to be most effective.

Rosemary is wonderful at dispelling negative energies. Make a cleansing bundle out of it if you feel like you have bad vibrations in your home. Burn this cleansing bundle in every room of the house and you should have effectively purified and protected your home.

Rosemary can be used in love spells. It can help to prevent infidelities and can also remove jealousy. If you feel jealous about something, light a dried sprig of rosemary and as you watch the flames consume the sprig, visualise how your jealous energy is being consumed and transformed into positive energy by the flames.

If you want to have vivid dreams, place a small sachet of rosemary under your pillow. This will help you to use your dreams to clarify any problems you might be having in your life while also stopping the dreams from turning into nightmares. Added bonus, you might just help boost your memory in the process.

The Magickal Properties of Rosemary

So my rosemary loving friends, today I’ll leave you with a mantra invoking the powers of rosemary. Place a sachet of rosemary under your pillow and say this mantra before heading to bed for the evening. It should help you to wake up feeling clear-headed and calm.

“Rosemary help me see with clear sight, protect my home and purify my light. Rosemary clarify my dreams in the night, help me to see things in a positive light. So Mote it Be”

Until next time my green-fingered lovelies,

If you enjoyed learning about rosemary, maybe you’d be interested in learning more about the magick of herbs and plants! Check out this plant magick grimoire we’ve made. It contains 29 hand illustrated pages and details all the magickal uses and attributes of all our favourite plants.